Posted in by Tudip at 10:11 Comments Off on Dynamic Application Security Testing

The DAST can be used in production and testing is carried out in a QA environment.

The DAST scanner looks for various types of vulnerabilities like input/output validation, Specific Application problem and mistakes in server configuration.

How does DAST work

A DAST scanner scans a running application for vulnerabilities and sends out automatic notifications if it detects weaknesses that allow for SQL injections, Cross-Site Scripting (XSS), and other attacks. DAST tools can discover runtime vulnerabilities that SAST tools can’t since they’re designed to work in a dynamic context.
A DAST scanner, in the context of a building, might be compared to a security guard. Instead of simply checking to see if the doors and windows are secured, this guard goes a step further by attempting to physically enter the premises. The guard may attempt to pick locks on doors or smash windows.After completing this examination, the guard may return to the building management and explain how he was able to get access to the structure. In the same manner, a DAST scanner actively attempts to find vulnerabilities in a live environment so that the DevOps team understands where and how to address them.

Difference between DAST and SAST

DAST targets the application from the outside in, targeting a software that might be used by a malicious user. When a DAST scanner conducts these attacks, it looks for results that are not part of the expected result set and detects security flaws.

SAST analyzes the static environment such as an application’s source code. It examines the programme from the “inside out,” looking for flaws in the code.

To increase the strength of security posture, it is better to use SAST and DAST together.  You may get a full picture of vulnerabilities by using this uniform taxonomy across testing techniques. 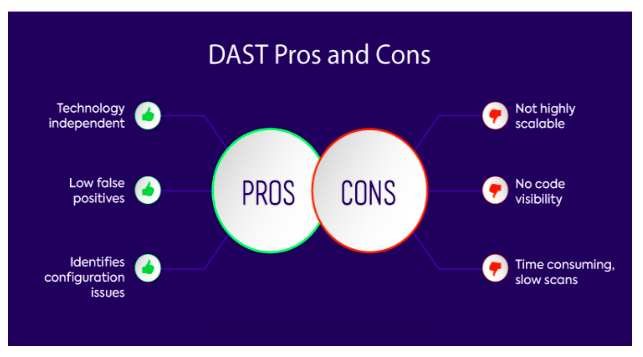