Posted in by Tudip at 06:02 Comments Off on Image Classification and Performance measures

Image classification is supervised learning [the process under human supervision] in the field of  AI and ML world and used to identify the objects [images] among others. Like Facebook and Google photos are examples of the most widely used.

Most of us know that these products can identify things, numbers, images of you, your friends and many more things around you.. But the question arises how?

MNIST is a collection of small 70,000 images of digits written by employees of the US Census Bureau and highschool students. Images are labeled with the digit which it represents.

We have a set of target images and we will build a model which focuses on relying on patterns and inference to learn using labeled images as a training set.

Let’s look at the very first image of this dataset. 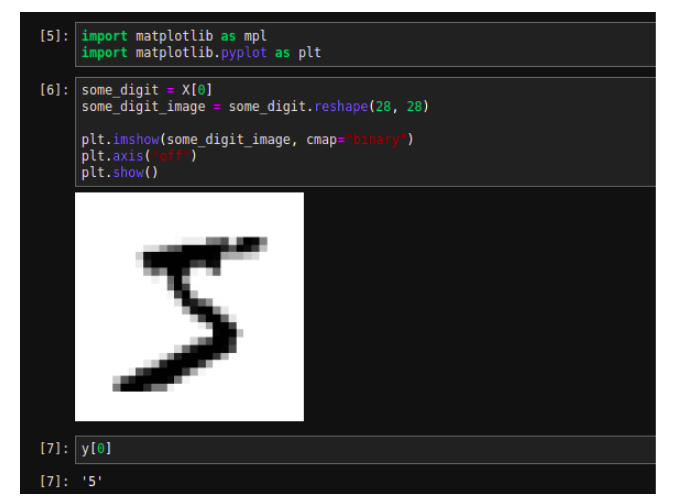 Let’s cast the y as integer.

Let’s create training and test sets. This dataset is already shuffled for us which guarantees that all cross-validation folds will be similar.

Let’s simplify the problem and identify the one digit only i.e a binary classifier with a Stochastic Gradient Descent (SGD) classifier, using Scikit-Learn’s SGDClassifier class .

The “StratifiedKFold” class performs the stratified sampling to produce the folds containing a representative ratio of each class.

The row of confusion matrix represents an actual class and the column represents the predicted class. Here the accuracy of +ve prediction is called precision of the classifier and the ratio of +ve instances that are correctly detected by the classifier is called recell or sensitivity or the true +ve rate.

It is more convenient to combine precision and recall together into a single metric called F1 score.

It always depends on the context that you want to precision or recall. Unfortunately, you can’t have it both, increasing the precision will reduce recall and vice versa and it is called the precision/recall trade-off.

The SGDClassifier makes its classification based on score from the decision function. If the score is greater than the threshold, it assigns that instance to the +ve class otherwise it assigns it to the -ve class.

We can’t set the threshold directly, instead we can use the decision scores that it uses to make the predictions. The default threshold is 0.

Increases the threshold to 8000

To decide the threshold, use the cross_val_predict() function to get the score of all instances. 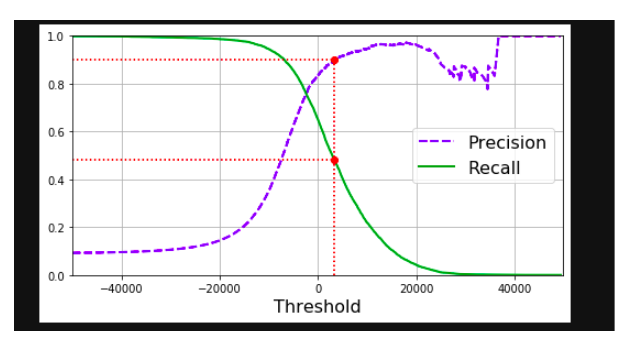 The receiver operating characteristic curve is another commonly used tool with the binary classifier. Instead of plotting the precision vs recall, the ROC curve plots the true +ve rate against the false +ve rate 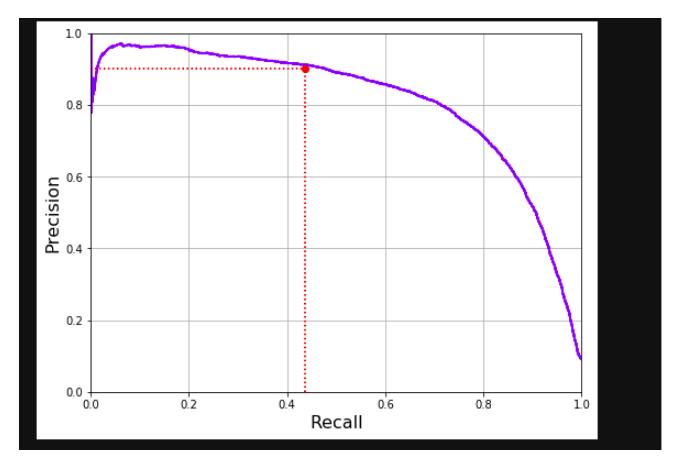 Another way to compare the classifier is to measure the area under the curve called AUC. The perfect classifier will have ROC AUC equal to 1

Now, use RandomForestClassifier and compare ROC curve and ROC AUC score to those of SGDClassifier. 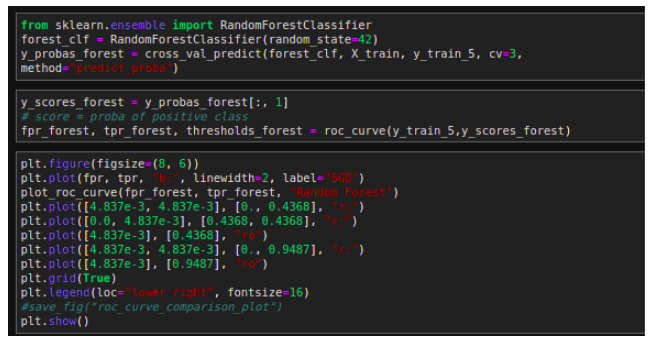 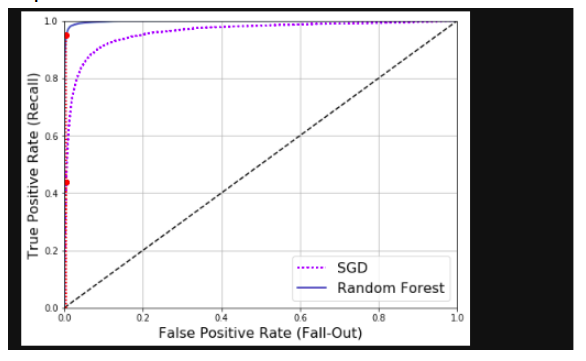 Multiclass classifier (it is also called a multinomial classifier) can distinguish between more than two classes. 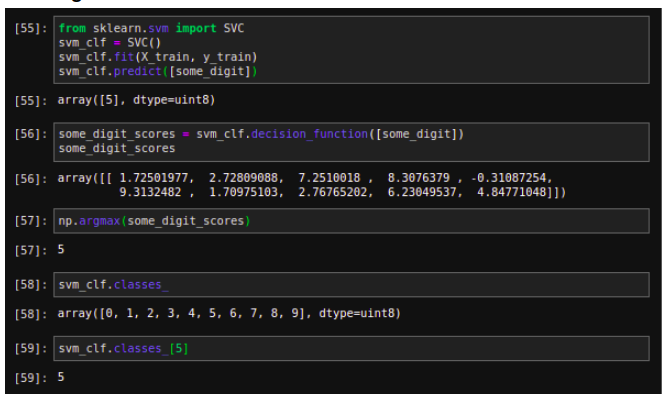 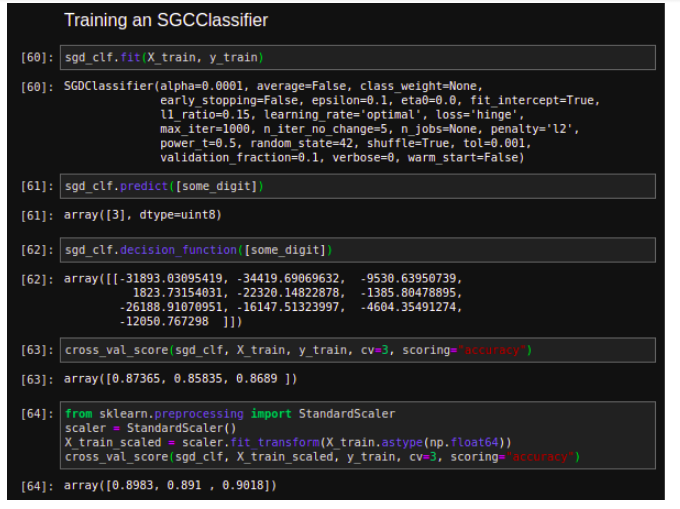 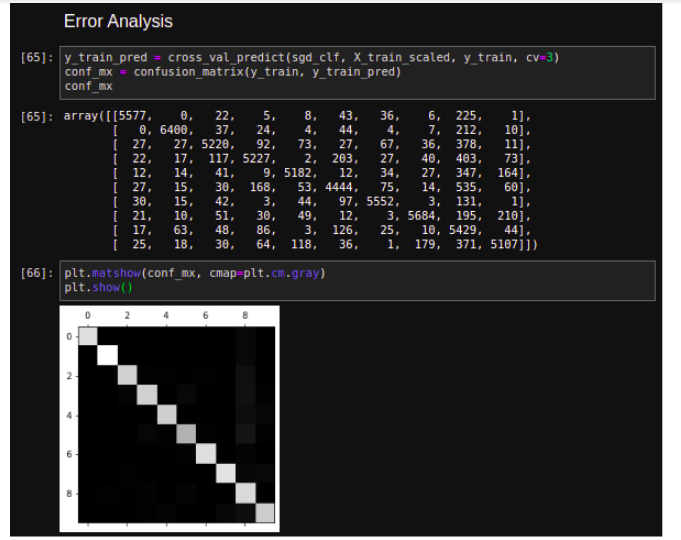 Let’s compare error rates instead of absolute numbers of errors

Now kind errors can be easily seen that the classifier can make. Remember, the rows represent the actual classes and columns represent predicted classes. 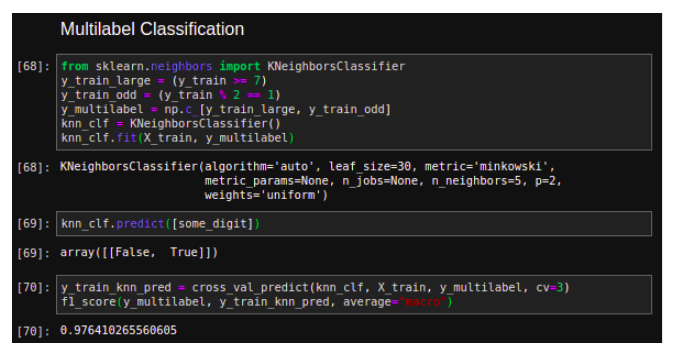 It is simply a generalization of multilabel classification where each label can be multiclass. It is also called multi-output-multiclass classification. Let’s build a system that removes noise from an image and output a clean digit image, represented as an array of pixel intensities. 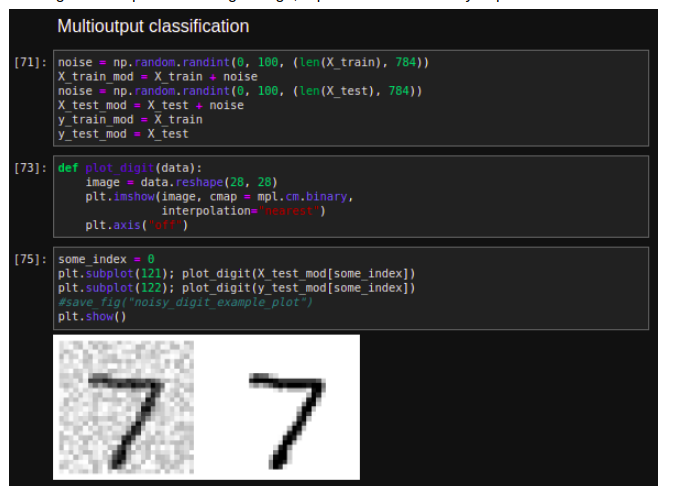 Finally, build a classifier On MNIST dataset With Over 97% Accuracy 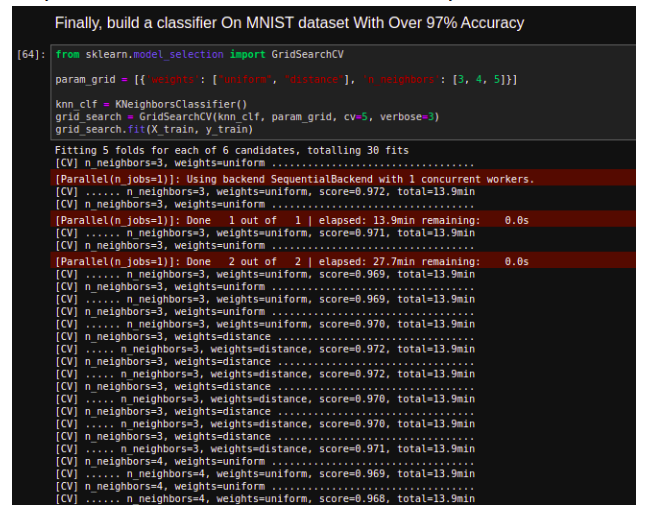 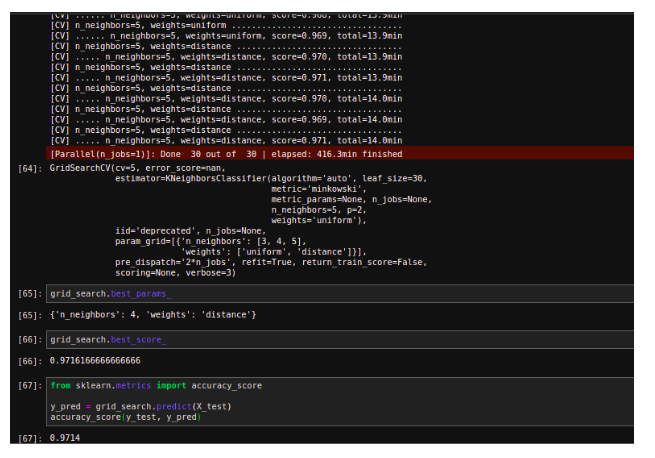