Posted in by Tudip at 05:01 Comments Off on Integrating Google Cloud Build with JFrog Artifactory

What is JFrog Artifactory?

JFrog Artifactory is the global binary repository manager, and is employed to integrate the 2 environments for safe, continuous delivery of production-ready applications to Kubernetes through GKE. JFrog Artifactory is that the mission-critical heart of the JFrog Platform functioning as the single source of truth for all packages, container images and Helm charts, as they move across the entire DevOps pipeline. Artifactory supports Kubernetes which is the latest orchestration tool in the industry, for scaling, deployment, automating and management of containerized and microservices applications.

The Goal of JFrog Artifactory is to ensure that you are using trusted third party libraries in your project.

How to Integrate Google Cloud Build with JFrog Artifactory?

Cloud Build makes fast software development easy and safe. Cloud Build enables you to build software faster across multiple languages and gives you complete control over the definition of your workflows for building, testing, and deploying across multiple environments. 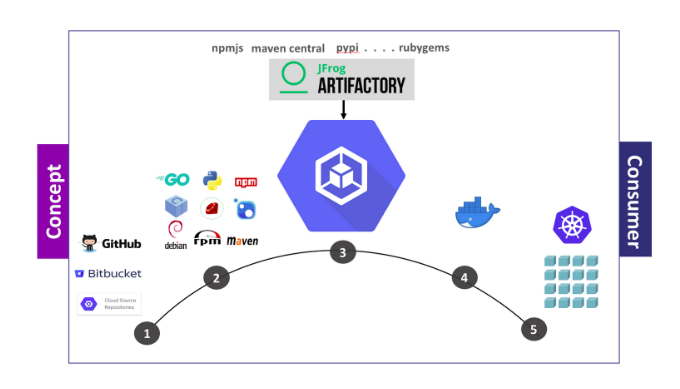 Using JFrog Artifactory with the Google Cloud build you can Containerize an existing application that’s stored in a private repository. The Goal of JFrog Artifactory is to ensure that you are using trusted third party libraries in your application which will prevent errors like  ERR! 418 I’m a Teapot.