Posted in by Tudip at 06:02 Comments Off on Subscribing to Message in pub/sub

A Cloud Pub/Sub is one of the available services in the Google Cloud Platform, which provides a messaging transport system. It takes the data from many senders and transmits it to many receivers in an asynchronous manner. It guarantees the delivery of all the individual messages sent by the senders but the delivery in order isn’t guaranteed.

Let’s have a look at some important terms which are given below related to this before diving into subscribing to messages:

Now let’s have a look at how these messages are subscribed:

Subscribers are of 2 types: 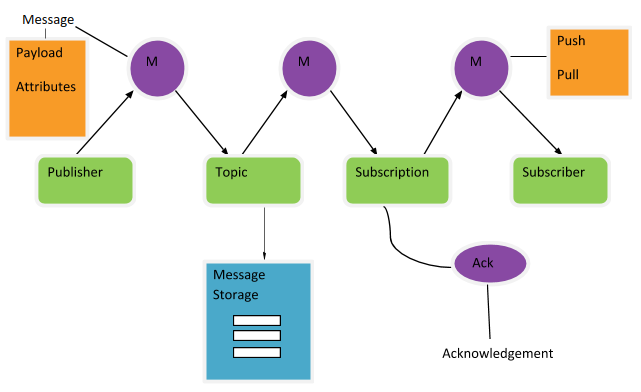 The message is delivered at least once to the subscriber and the Pub/Sub tries to deliver it repeatedly until an acknowledgement is received.

In this case, there won’t be any acknowledgement because the message was sent before the subscriber subscribed to a new topic. A subscriber must subscribe to a topic before publishing a message to it.

In this method, we clone the python-docs-samples repository(from GitHub) which contains the python libraries. These libraries, in turn consist of publisher.py and subscriber.py files in which methods for various operations like listing, creating, deleting  topics or subscriptions etc. are defined. These have different arguments to be passed in order to implement these operations on a publisher, topic, subscription or a receiver.  Here is how we do this:

Given below are examples of the operations done while subscribing to messages: