Posted in by Tudip at 09:07 Comments Off on The Importance of Localization in Marketing and IT Industry

Localization plays an important role in the internationalization of a company as it is a fundamental service for businesses seeking to expand globally. Not only will these businesses need to translate their material into different languages, but they will also need to localize their material if the product or service is to be used in a certain region and a literal translation would not be sufficient.

For many people outside this area, localizing is the same as translating, but the truth is that translation is only one part of the localization process. The term “localization” is generally used in the software, web, e-commerce, marketing, mobile applications and video games sectors, while in other sectors it refers to or only requires a “translation”.

So what is localization or what does it mean to localize (linguistically speaking)?

Localizing is not only translating content, localizing implies making modifications or adaptations of original content to create a product or service that can be marketed in a target market. For example, a localizer must understand how date and number formats, currencies, measurement systems, telephone numbers, images, slogans and even colors work in the culture for which the product or service is intended.

Therefore, translating  is not enough, a full knowledge of the cultural aspects is needed for the product or service to which it is being localized to avoid that the message that is intended to give is not offensive or lose the meaning in the other language due to literal translation.

Therefore, attention to detail is also essential in localization work, as it could destroy an entire project due to inappropriate or offensive details that may go unnoticed and could compromise the way the project is received and understood by the end user.

For example, the Japanese automaker Mitsubishi had to change the name of its Pajero model for the Spanish-speaking market because it coincided with another Spanish word that is sexual in nature.

So, what can be localized?

Coca-Cola’s “Share a Coke” campaign is a good example of localization in marketing by changing the names of its cans according to the most common names in each country. In this case, no translation work was required as such, but a cultural and regional knowledge was necessary.

Another example could be fast food chains such as McDonalds or Subway, which not only have to change their menus according to each country or region due to different customs and preferences, but they also have to do exhaustive localization work to adapt their web pages, commercials, videos and other elements with which customers interact. 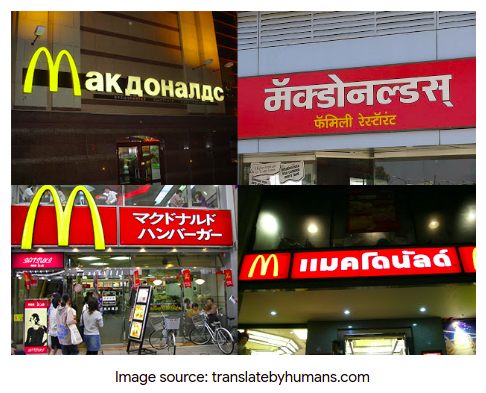 In the software industry it does not need dubbing, as software products usually do not include voice, in this case, the localization team would take care of the printed material (if any), the interface, the Web and the customer service.

In which languages is it usually localized?

In software and IT products, given the supremacy of English in the technical field, localizers for FIGS (French, Italian, German and Spanish) languages are generally required but this is no longer sufficient, recently there has been an increase for CJK (Chinese, Japanese and Korean) language localizers because these markets have a good buying potential for IT companies.

Google, for example, with its learning platform on Cloud Computing services, Qwiklabs, offers courses organized in Labs and Quests in languages such as German, English, Spanish, French, Portuguese, Japanese, Indonesian, among others, thus helping many users around the world to make the most of their investment in the cloud by offering a place to learn and expand their cloud skills in their own languages.

Now you know, localizing is not the same as translating, so take care of your localization team if you want your business to expand successfully.