Posted in by Tudip at 04:10 Comments Off on Understanding Incremental DOM and Virtual DOM

What is Virtual DOM? How does it Work?

Virtual DOM was first used by React, which is defined by this key idea:

Incremental DOM is used internally at Google, and is defined by this key idea:

Each component gets compiled into a series of instructions. These instructions then create DOM trees and update them in-place when the data changes.

Why did the Google team prefer incremental DOM instead of virtual DOM?

The goal was to make applications perform well on mobile devices. This essentially meant optimizing two things: the bundle size and the memory footprint.

To achieve these two goals:

Why is Incremental DOM Tree Shakable?

When practicing incremental DOM, the framework does not interpret the component. Rather, the component references instructions. If it doesn’t reference a particular instruction, it will then never be used. And since we know this at compile-time, we can eliminate the unused instruction from the bundle. 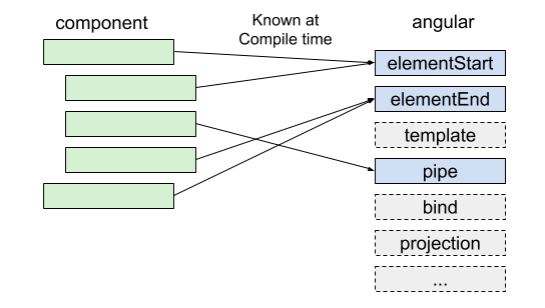 Virtual DOM requires an interpreter. What a part of that interpreter is required and what part isn’t isn’t known at compile time, so we’ve to ship the entire thing to the browser.

Why does an Incremental DOM have a Low Memory Footprint?

Virtual DOM generates a whole tree from scratch every time you rerender.

On the other hand, Incremental DOM  doesn’t require any memory to re-render the view if it doesn’t change the DOM. We only need to allocate the memory when the DOM nodes are added or removed. And the size of the allocation is equivalent to the size of the DOM change.

Since most of the render/template calls don’t change anything (or change very little), this can result in huge memory savings.

Angular has always been focusing on HTML and templates. This is why the main advantage of using virtual DOM could never apply to Angular.

Given this, and the tree shakability and memory footprint of the incremental DOM, I think it was the right choice to use incremental DOM as the base of the new rendering engine.