Posted in by Tudip at 04:04 Comments Off on Basic Concepts of Networking in Google Cloud Platform

Virtual Private Cloud Network or simply network is a virtual version of a physical network. In Google Cloud Networking, networks provide data connections into and out of cloud resources – mostly Compute Engine instances. Securing the Networks is critical to securing the data and controlling access to the resources.

A Subnetwork can be in two modes:

When a new project is created, a default network configuration provides each region with an auto mode network with pre-populated firewall rules.

Each instance which is created within a subnetwork gets assigned to an IPv4 address from that subnetwork range.

Note: Since the default Network allows relatively open access, it is a recommended best practice that you delete it. The default Network cannot be deleted unless another Network is present. Please make sure you delete all the firewall rules for the associated VPC before deleting the VPC network.

Each network has a default firewall rule that blocks all inbound traffic to instances (default-deny-all-ingress). To allow traffic to an instance, we must create “allow” rules for the firewall. Also, the default firewall allows traffic from instances unless we configure it to block outbound connections using an “egress” firewall configuration (default-allow-all-egress). Therefore, by default we can create “allow” rules for traffic we wish to pass ingress, and “deny” rules for traffic which we wish to restrict egress. We can also create a default-deny policy for egress and prohibit external connections entirely.

In general, it is recommended to set the least permissive firewall rule that will support the kind of traffic which we are trying to pass. For example, if we want to allow traffic to reach some instances, but restrict traffic from reaching others, create rules that allow traffic to the intended instances only. This configuration which is more restrictive happens to be more predictable than a large firewall rule that allows traffic to all of the instances. If we want to have “deny” rules to override certain “allow” rules, we can set priority levels on each rule and the rule with the lowest numbered priority will be evaluated first. It is not recommended to create large and complex sets of override rules as it can lead to allowing or blocking traffic that is not intended.

The ingress firewall rules which are automatically created for the default network are:

We cannot SSH into an instance without allowing SSH firewall rule.

We can review the default firewall rules using the console through this path: Navigation menu > VPC networks > Firewall rules.

GCP Firewalls are stateful: for each initiated connection tracked by allowing rules in one direction, the return traffic is automatically allowed, regardless of any rules.

The privilege of creating, modifying, and deleting firewall rules has been reserved for the compute.securityAdmin role by IAM. Users assigned to the compute.networkAdmin roles are able to safely view and list firewall rules that might apply to their projects.

Allow and ingress are values which we can set for the flags —action and –direction while creating the firewall rules. –action can have 2 values. ALLOW and DENY. ALLOW was the only action supported previously. DENY rules are generally simpler to understand and apply.

With INGRESS, EGRESS, ALLOW, DENY, and PRIORITY we have maximum control and flexibility for determining connections in and out of our networks.

All networks have routes created automatically to the Internet (default route) and to the IP ranges in the network. The route names are automatically generated and will look different for each project.

We can review the default routes using the console through this path: Navigation menu > VPC network > Routes.

When manually assigning subnetwork ranges, we first create a custom subnet network, then create the subnetworks that we want within a region. When we create a new subnetwork, its name must be unique in that project for that region, even across networks. The same name can be repeated in a project as long as each one is in a different region.

The command given below will create a subnet named subnet-us-central for the custom mode network which we have created now.

Instance Tags are used by networks and firewalls to apply certain firewall rules to tagged VM instances. For example, if there are several instances that perform the same task, such as serving a large website, we can tag these instances with a shared word or term and then use that tag to allow HTTP access to those instances with a firewall rule. Tags are also reflected in the metadata server, so we can use them for applications running on our instances.

Firewall rules can be created using either a console or cloud shell. Here we will create using cloud shell.

The following command will create a firewall rule to allow HTTP internet requests.

The above command will create a firewall-rule which will allow HTTP internet requests to those instances which have the tag http because we are using the flag –target-tags.

Here is an example command to create an instance which has tags. 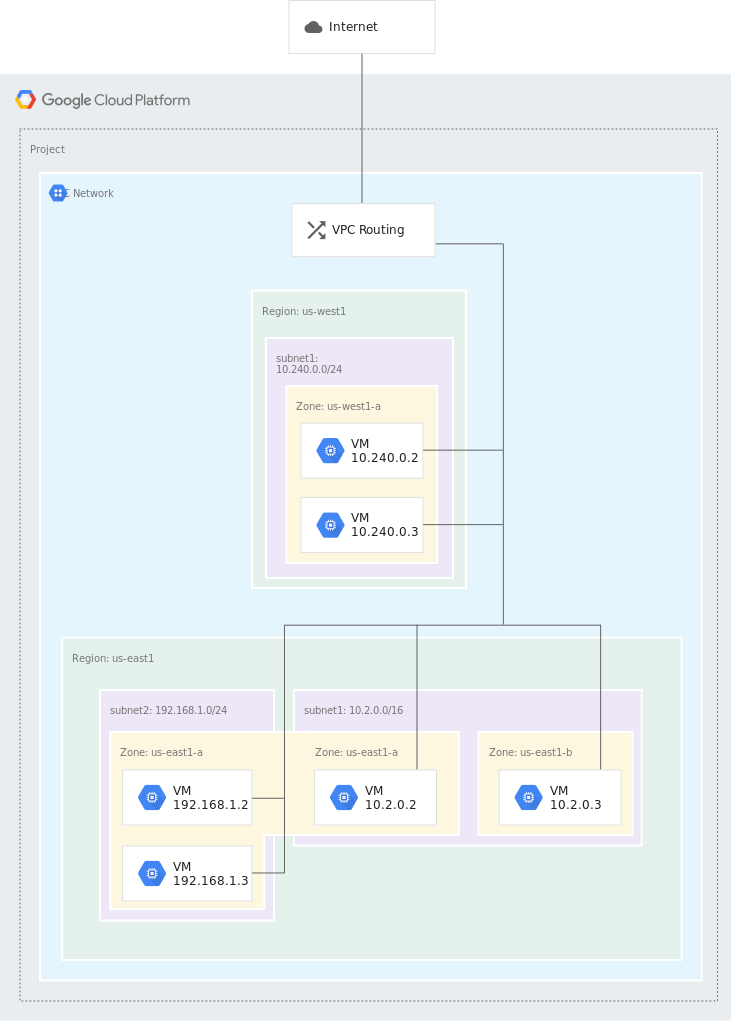 In the above example, subnet1 is defined as 10.240.0.0/24 in us-west1 region. There are 2 VM instances in the us-west1-a zone in this subnet and their IP addresses are from the available range of addresses in subnet1.

Subnet2 is defined as 192.168.1.0/24 in the us-east1 region. There are 2 VM instances in the us-east1-a zone in this subnet and their IP addresses are from the available range of addresses in subnet1.

Subnet3 (mistakenly mentioned as subnet1 in the diagram) is defined as 10.2.0.0/16, in the us-east1 region. There is one VM instance in the us-east1-a zone and the second instance in us-east1-b zone in subnet3, each receiving an IP address from its available range. Because subnets are regional resources, instances can have their network interfaces associated with any subnet in the same region that contains their zones.

Read more about What is Virtual Data Center in Google Cloud Platform (GCP)?