Posted in by Tudip at 09:06 Comments Off on The Internet of Things on AWS

IoT, what is IoT?

IoT is the Internet of Things. We all have heard about IoT but has anyone heard of Kevin Ashton? Well, let me introduce you to the man who coined the term “Internet of Things”. He is a British technology pioneer. Well in simple terms, the Internet of things is the network of day-to-day usable things around us, to listen and react to it, just like we humans do. Internet of Things basically consists of the following things:

The Internet is nothing but the network to connect the things with each other. Things can be anything (Physical) vehicles, home appliances, device and other things embedded with sensors, electronics, software, and actuators for connectivity purposes. Hence, in this blog, I would be walking you through IoT service provided by AWS. Okay, so AWS (Amazon Web Services) is one of the biggest and strong service providers across the world. AWS provides lots of services. Amongst which, we will be looking at AWS-IoT. As AWS asks, “If you knew the state of everything in the world, and could reason on top of the data: What problems would you solve?” The answer to this question is “Anything and everything.” Let me clear your thoughts if you know the state of a device(physical thing), says the main door of a house. If it’s closed then you can utilize this information and show it in an application which is user’s phone who is away from home and wouldn’t it be great if that user knows if the door is opened abruptly just by a notification on his phone. He knows something is wrong. He can call the cops. This is just an example. We can achieve much more, given proper information.

In IoT, everything is dependent on the state. All that IoT does is collects the data and sends it to the user. Yes, we have to configure what should be sent and what all data needs to be collected from things. IoT works on the publish-subscribe model.

Benefits of AWS-Internet of Things:

We will be using the AWS IoT Core service for connecting to the device and interacting with the cloud applications and other devices. AWS IoT supports billions of devices and trillions of messages. It can process and route these message to the AWS endpoints and to other devices securely and reliably with the help of MQTT. (MQTT is an ISO standard publish-subscribe-based messaging protocol)

Note: All the examples are in Node.js Steps:

2. Create thing with the unique name. 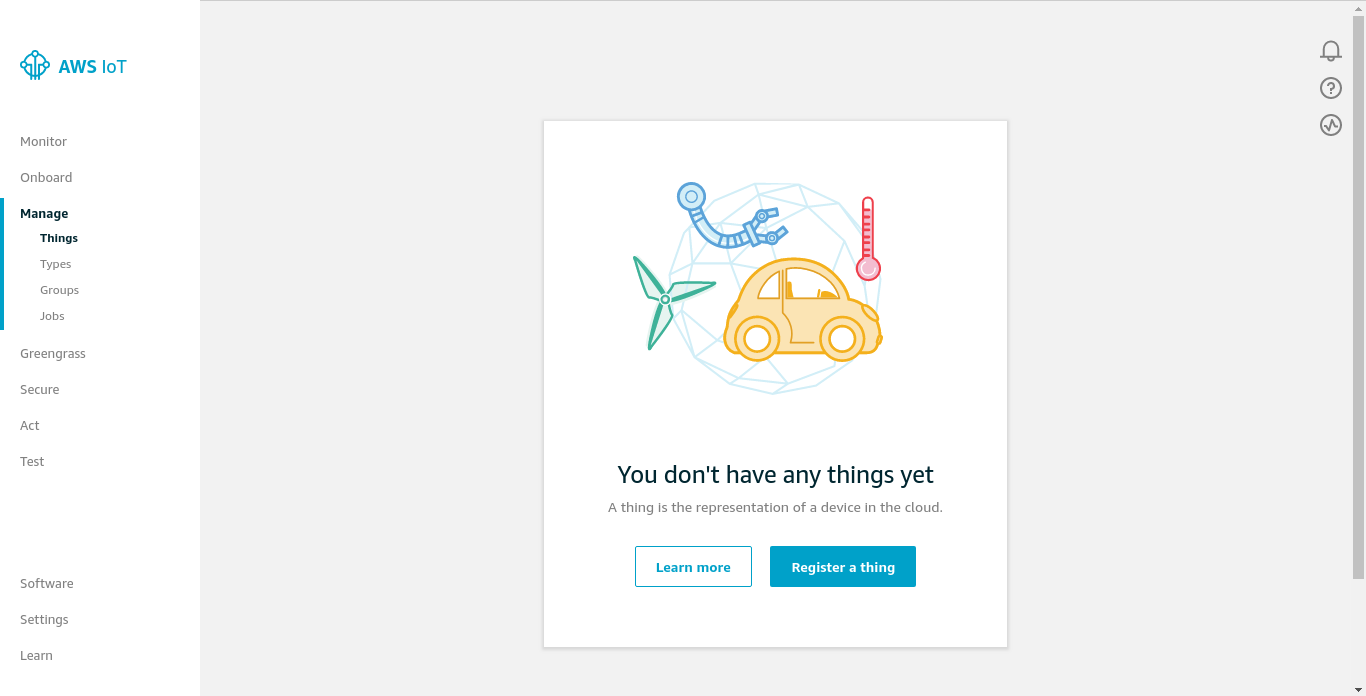 Created things can be managed under Manage >> Things tab on IoT Console.

3. Create a certificate and set it as active.

4. Create the policy for the thing newly created things.

Furthermore the policy, you can add restrictions of publishing and subscribe to the thing. While defining the policy document, you can specify the resources that would be interacting with the thing using “Resource” key from the “Statement” from policy document. It is set to “*” to allow everyone.

6. Attach the thing principle with its own certificates.

Publish a message to the thing: AWS provides us with the physical configurable device to publish messages to the thing using AWS IoT Button. Or else we can do this using code as shown below:

As one can publish the data to the thing, Consequently one can listen to data using subscribe method of AWS-IoT.

List of actions supported by Lambda function can be seen here. While creating rules in AWS IoT, we define two things:

In addition to the above AWS provides the following services as well: